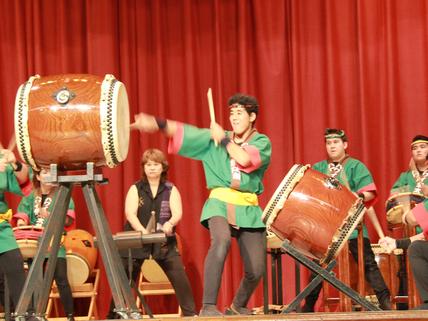 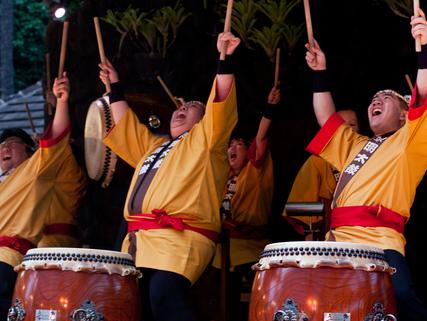 Somei Taiko, based at the Soto Mission of Aiea, in the heart of Aiea, Hawaii, was founded by Shuji & Jaymie Komagata of Hawaii Matsuri Taiko.  With a combined 50-plus years of taiko experience, they began Somei Taiko in November, 2005, to share with their students the dynamic art of taiko, to train and to perform with great energy and spirit. Today, over 100 students of varied backgrounds ranging in age from 5 years to adult make up Somei Taiko.

Hawaii Matsuri Taiko, formed in 1984, by Faye Komagata was the first ensemble Japanese drum group in Hawaii to perform year-round.  The exciting performances of this multi-ethnic group have contributed greatly toward popularizing taiko in Hawaii and on the mainland.  Hawaii Matsuri Taiko’s repertoire of traditional and modern Japanese taiko music, as well as original taiko compositions reflect the group’s Western and Japanese cultural heritage.  The pulsating, throbbing beats of the taiko generate energy and excitement, touching the hearts and souls of its audience.