Affectionally known as the "Mother of Taiko in Hawaii," Faye Komagata is the founder of Hawaii Matsuri Taiko in 1984. The first "Kumi-daiko" (ensemble taiko group) of its kind to perform year round in Hawaii, Mrs. K (as she is known by all her students) paved the way for other taiko groups to form in Hawaii.  Initially intended as an afterschool activity for the students at Kaala Nippongo Gakuen at Wahiawa Ryusenji Soto Mission (where her husband, Rev. Shugen Komagata was the resident minister), Mrs. K quickly realized the power of taiko to bring the multicultural community together.

After launching her taiko group, Mrs. K shared her knowledge of taiko to help form taiko groups at nearly every Soto Mission temple in Hawaii: Kona, Hilo, Maui, Molokai, Kauai, Waipahu, and Aiea. With her outgoing personality and "never say no" attitude, Mrs. K brought taiko senseis from both Japan and the mainland to mentor her students.  Through networking with other groups, Mrs. K led Hawaii Matsuri Taiko on several taiko tours to Japan and the mainland.  Over the years, Mrs. K has touched the lives of hundreds of taiko students.

In January 2015, Mrs. K officially handed down charge of Hawaii Matsuri Taiko to her son and daughter in-law,  Rev. Shuji and Jaymie Komagata.

Jaymie Komagata began her taiko career at the age of 11 with Hawaii Matsuri Taiko in 1986, while a Japanese School student at Wahiawa Ryusenji Soto Mission.  In 1989, she joined the performing group and quickly became one the young leaders of the group.  In 1990, Jaymie was recruited by the late Den Tagayasu, to join his group Ondekoza in Japan. Although Jaymie ultimately declined the offer, the opportunity opened many doors for her to learn taiko under  many of the great taiko artists like Kiyonari Tosha, Seiichi Tanaka, Kenny Endo, Chizuko Endo, Seido Kobayashi, Etsuo Hongo, Yoshikazu Fujimoto, Marco Lienhard, Roy Hirabayashi, and PJ Hirabayashi.  In 2005, Jaymie cofounded Somei Taiko with her husband, Rev. Shuji Komagata.  In January 2015, along with Rev. Shuji, Jaymie succeeded Faye Komagata as the leaders of Hawaii Matsuri Taiko. 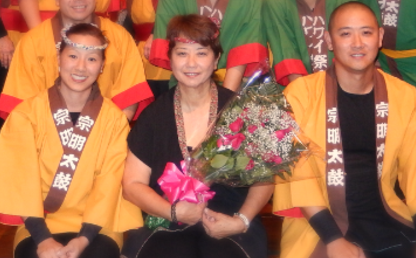 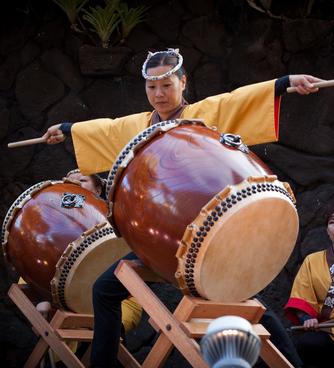 Rev. Shuji Komagata began playing taiko at the age of 5 in 1979.  Shuji is an original member of Hawaii Matsuri Taiko, formed in 1984. Throughout his childhood and teen years, Shuji studied under various pioneers of Kumi-daiko (ensemble taiko playing) that included, Kiyonari Tosha, Seiichi Tanaka, Kenny Endo, Chizuko Endo, Seido Kobayashi, Etsuo Hongo, Yoshikazu Fujimoto, Marco Lienhard, Roy Hirabayashi, and PJ Hirabayashi.  In 1994, Shuji moved to Japan to formally study the Sukeroku Style of drumming as a member of Kiyonari Tosha's Nihon Taiko Dojo.  In 1996, he continued his training as a performing member of Seiichi Tanaka's San Francisco Taiko Dojo.  In 2001, Shuji moved back to Hawaii and became the head instructor of Hawaii Matsuri Taiko.  In 2005, while the resident minister of the Soto Mission of Aiea, Rev. Shuji founded Somei Taiko with his wife, Jaymie. Together, they have grown the taiko school to close to 100 students.  In January 2015, Rev. Shuji and Jaymie Komagata succeeded Faye Komagata as the leaders of Hawaii Matsuri Taiko. 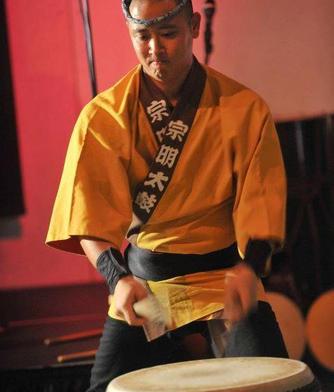